2022 was a great year in terms of investment in technology and biotech startups in Spain. After a record 2021, with €4,208B invested in a total of 402 public operations, today we say goodbye to 2022 with more than €3,365B invested in a total of 411 operations in startups (€843M less than last year). An interesting figure given the international context we have faced this year.

Spain consolidates its European entrepreneurial ecosystem, with Madrid and Catalonia as Regions of national reference and makes it clear that the investment obtained in 2021 was not a mirage, but that the startup sector is increasingly more significant in Spanish society. These data are backed up by what is already a reality: The Startup Law, approved last December 1 in the Congress of Deputies; and the number of startups continues to grow, around 8,000 according to different local sources consulted, of which more than 4,000 are already identified and monitored in our data platform: Startup Ecosystem.

Five Spanish companies have reached become unicorns, all of them in the top 5 of the most important investment rounds of 2022: Paack (€225M), Fever (€200M), Typeform (€123M) and Factorial (€123M), which join the exclusive club of companies valued at more than 1 billion (nine): Jobandtalent, Idealista, Glovo, Cabify, Devo, Flywire, Wallbox, eDreams and Travelperk. 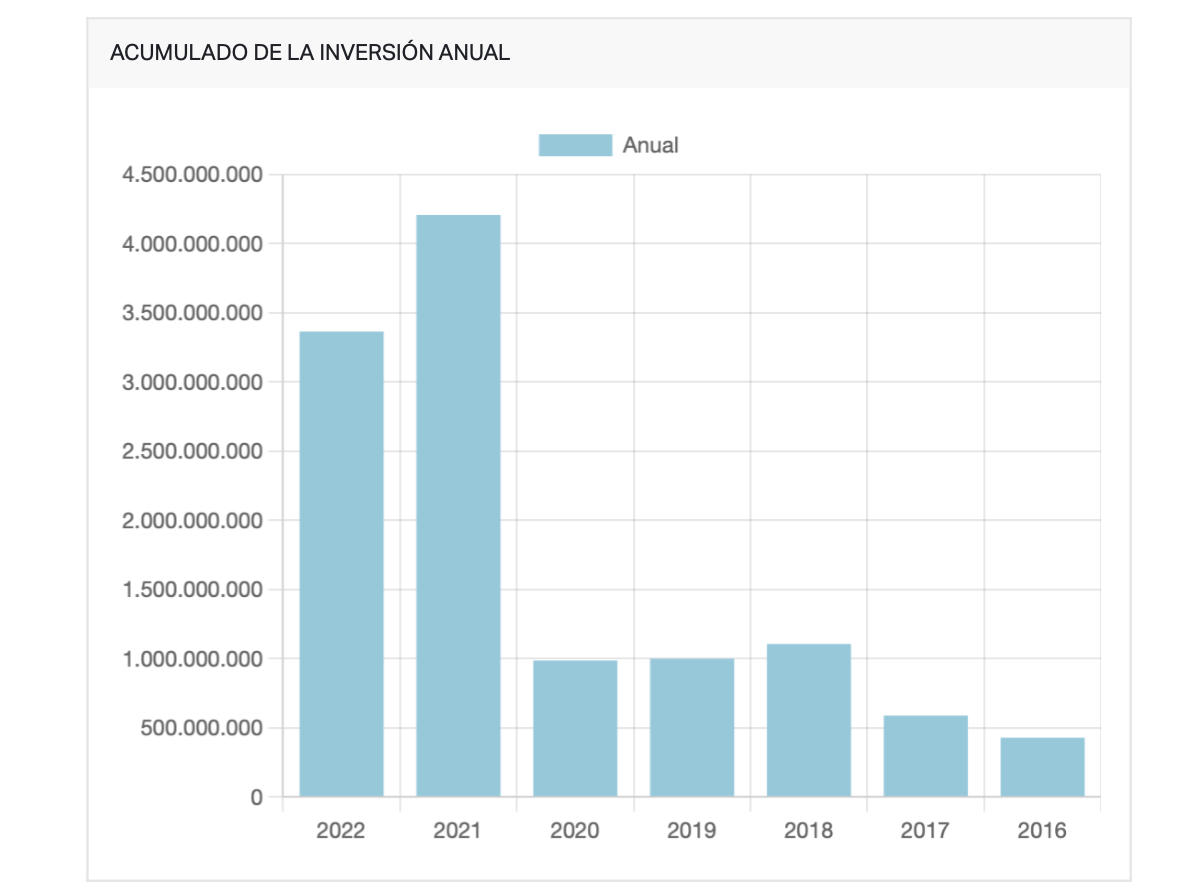 2022 has been a year in which Catalan startups have undoubtedly accumulated the most investment. The data show that this Autonomous Region and its companies attracted, in 153 operations, €1,574,662 million. Madrid, on the other hand, reached 131 deals and €1,086,738.97 million. In terms of number of operations and investment, both regions are followed by the Valencian Region, with 42 rounds and €394.303’723 million. In fourth place is Castilla y León, with only four operations. The situation can be explained by the deal closed by the Palencia-based company Zunder, which reached €100 million. Andalusia ranks fifth in terms of cumulative investment in terms of Autonomous Regions. In this region, during 2022, 23 operations worth almost €72 million were closed.

Figures very similar to those of 2021, but with a clear exception. 2021 was very special for the Madrid Region, where €2,297B of investment was closed in a total of 199 operations. A figure that dropped considerably compared to 2022, where €1,087B was accumulated (€1,200B less than the previous year and an approximate figure for the total drop in investment in 2022 compared to 2021). 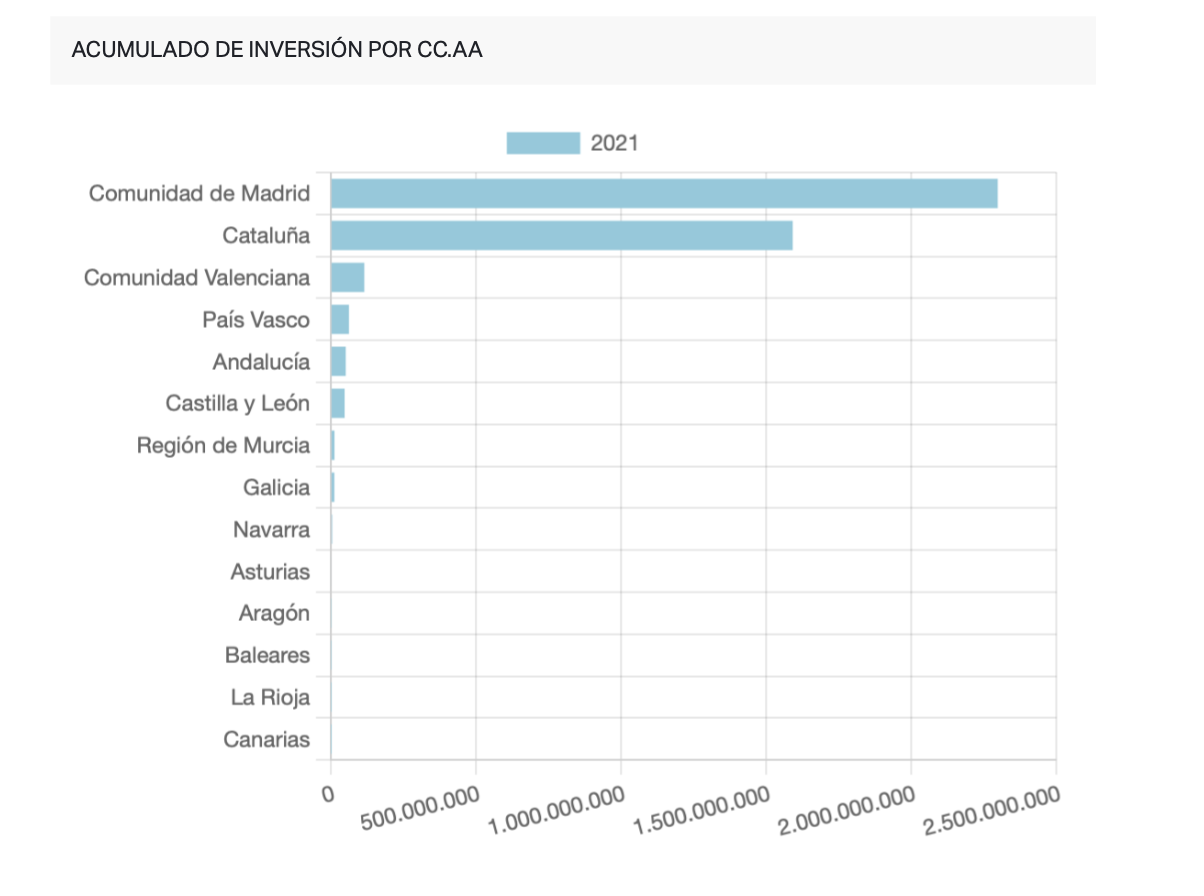 THE MOST ACTIVE SECTORS IN 2022

In 2022 the star sector was SaaS, with 37 deals and more than €527 million accumulated. The startups responsible for this figure were Typeform, a SaaS platform based in Barcelona, which closed a Series C for €123 million, and Factorial, which obtained the same amount and reached a valuation of €1 billion. The SaaS sector was followed by the leisure sector, with operations such as those of Civitatis and Fever. The leisure sector accumulated €321 million in five operations. 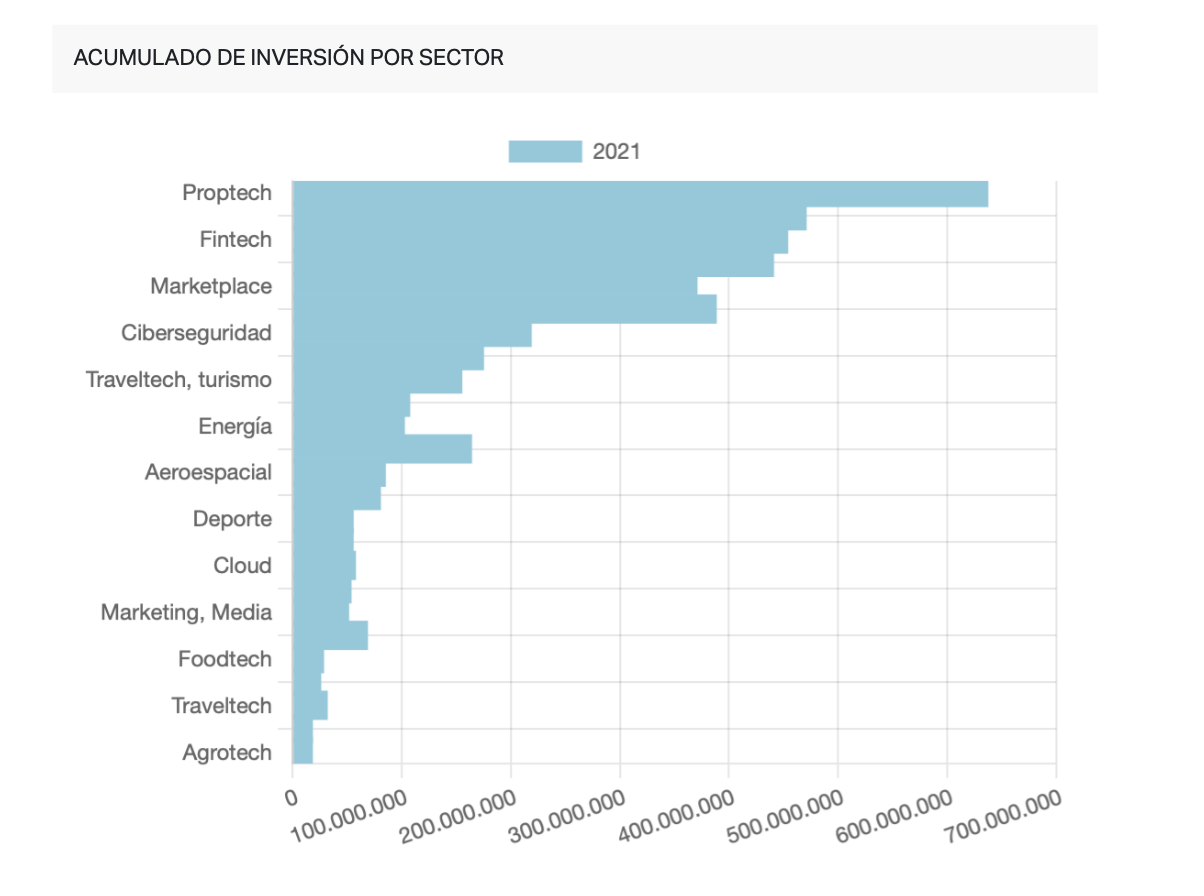 INVESTMENT IN 2022 BY MONTH

Another noteworthy data of the accumulated investment is a comparison by month. In 2022, a decrease is observed as the months go by. Thus, January began with 34 operations and more than €710 million raised, while December closed with 30 operations and close to €76 million. This was the month with the lowest investment of the year, followed by September, when 100 million was reached. It was October that came in with 40 operations and a total of €448 million, which, although it did not reach January’s level, was considerably higher than in previous months.

The complete analysis of the monthly accumulated can be viewed at the following link. 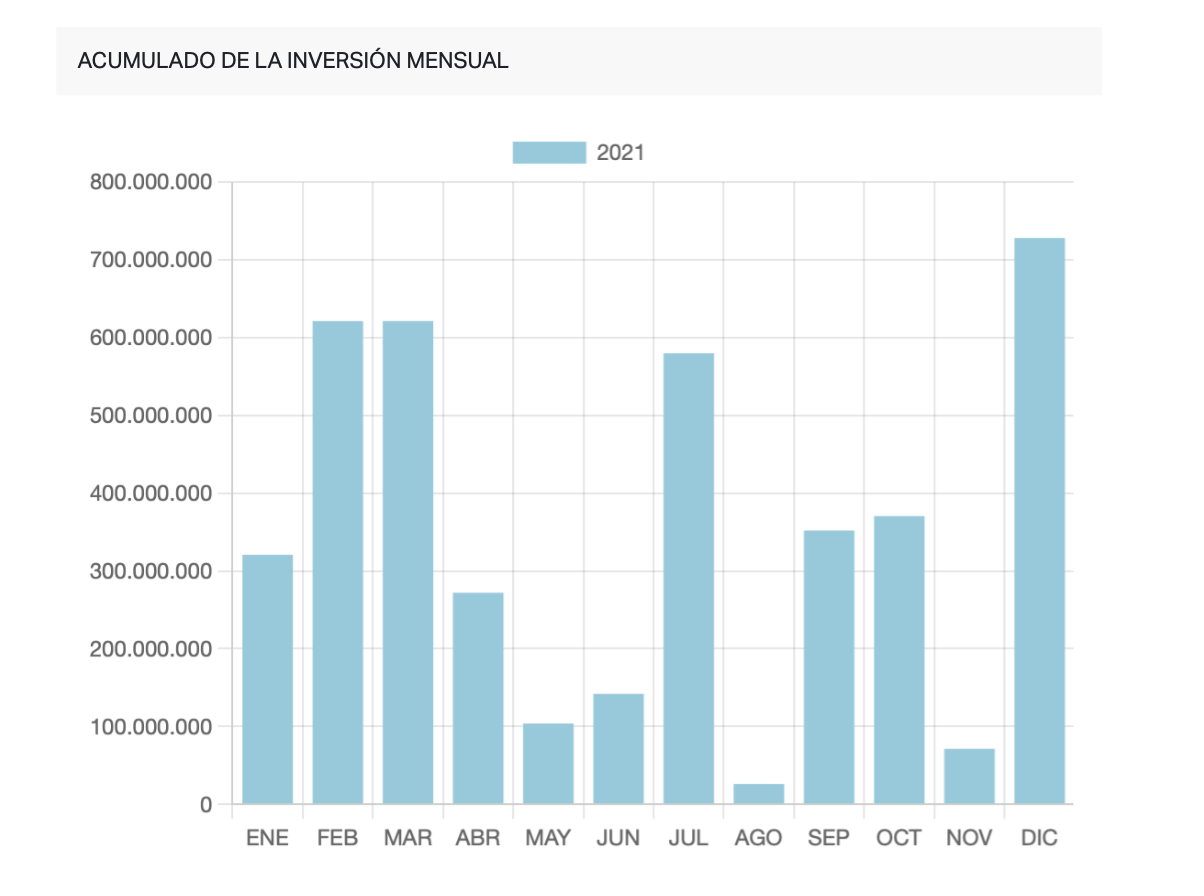 The rounds that accumulated the most investment in the past year were:

The major project of El Referente during 2022 was Startup Ecosystem, the largest database of startups and investors in Spain in real time, which will also undergo improvements during 2023. With more than 4,300 startups, more than 260 investors and more than 250 business angels.

Of the more than 4,000 startups in Spain, Catalonia has 1,310, while the Madrid Region has 1,277. Both are the regions that attract the most companies, as is the case with investment. In 2022, 70 new startups were created in Catalonia, while the number reached 72 in Madrid. In this section, the Valencian Region also ranks as the third Spanish innovation hub with 451 startups, of which 29 were created in 2022. The region with the least number of startups is, according to Startup Ecosystem, Cantabria with 11. It is followed by La Rioja (14) and Castilla-La Mancha (17). 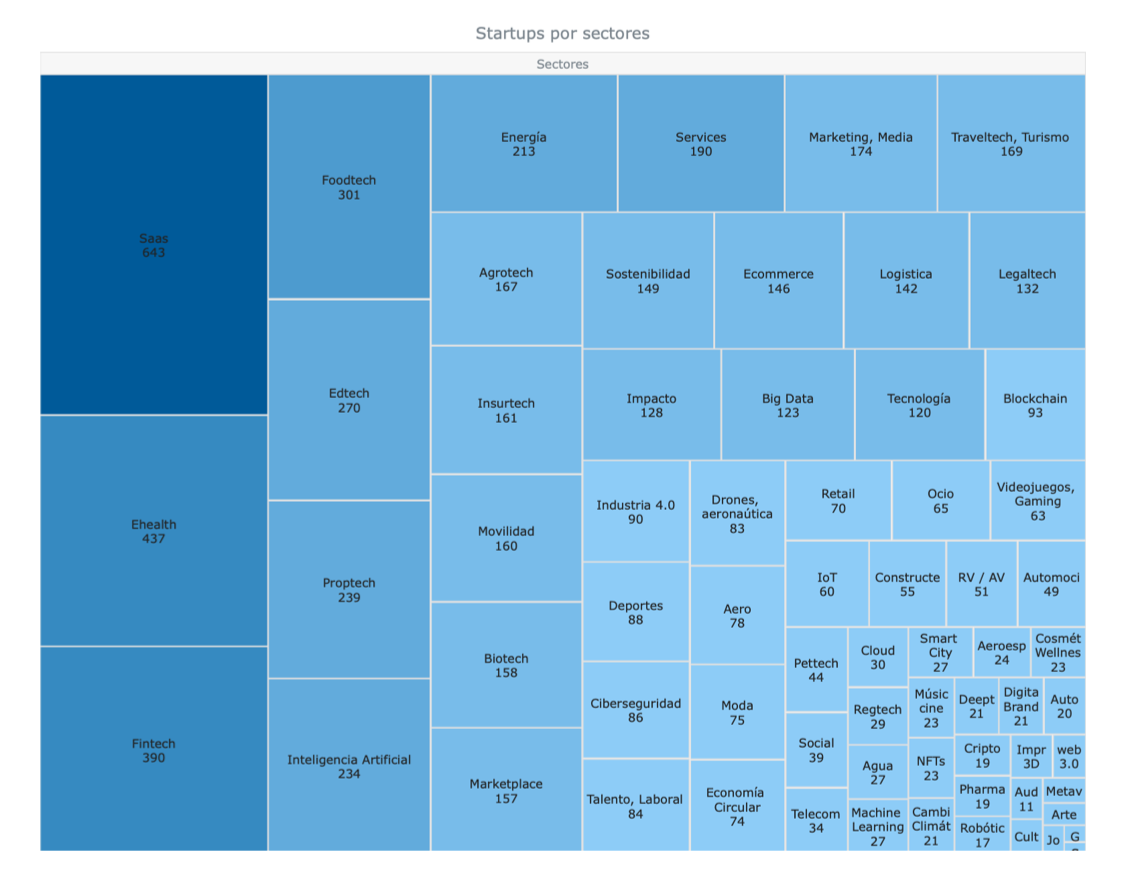 The sector that attracts the most investment is also the one that brings together the most startups. The SaaS sector in Spain has 643 active startups.
It is followed by ehealth, with 437, fintech, with 390, foodtech with 301 and edtech with 270. In addition to functioning as a database, Startup Ecosystem also provides information on different issues. The first of them, the existing gender gap in the ecosystem. The first question would be: “How many women entrepreneurs are there in Spain?”. In Spain, out of a total of 5754 people who have founded startups, there are a total of 903 female entrepreneurs compared to 4851 male entrepreneurs. In percentages, this figure translates into 15.69% female founders compared to 84.31% male founders. 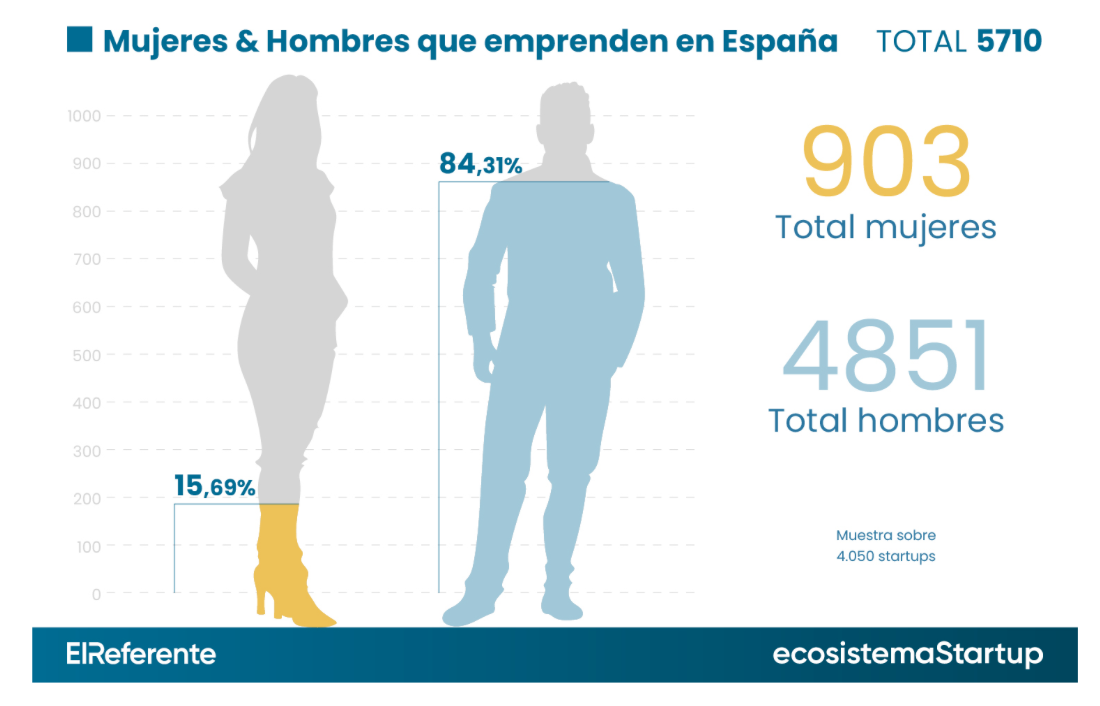 Snab raises €1.1M in its pre-seed funding round